Literature / A Boy and His Dog 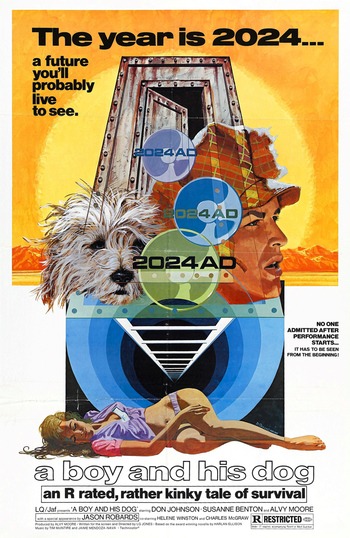 This 1969 Science Fiction Novella by Harlan Ellison is a look into the life of Vic and his telepathic dog Blood as they wander a post-apocalyptic United States after World War IV, scavenging for food and looking for sex. When Vic discovers Quilla, a beautiful young woman who appears to have come from one of the last refuges of civilization, he is instantly smitten with lust and assaults her at gunpoint. Before he can do the deed, they have to defend themselves from a band of rogues - they escape and a nascent romance develops.

After much testing of mattress springs, she persuades him to come back to her home and to leave Blood behind. There, he is told that their underground society has stagnated, and their fertility rate has dropped, so they need healthy sperm donors. Despite his initial enthusiasm, Vic takes exception to their methods and escapes with Quilla's help.

The original story was so successful, it won the 1970 Hugo Award, became a 1975 film starring Don Johnson, and was continued with short stories and a graphic novel; Vic and Blood: The Continuing Adventures of a Boy and His Dog. Just before the author's passing in 2018, he published the complete adventures of Vic and Blood in the Fix Up Novel Blood's a Rover.

The Trope Codifier for the Post-Apocalyptic Dog. No relation to the 1946 short film of the same name.

This story (including adaptations and sequels) contains examples of the following tropes:

Alternative Title(s): A Boy And His Dog