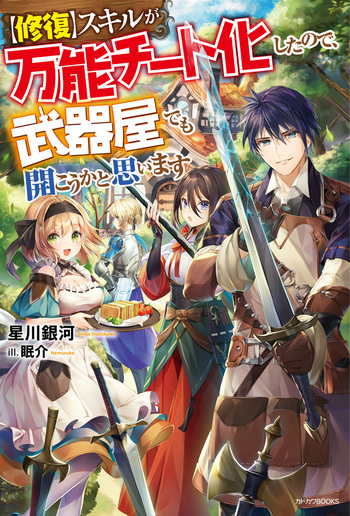 I don't want to adventure anymore, come to my shop!
Advertisement:

Full Title: My 【Repair】Skill Became an Almighty Cheat Skill, So I Thought I’d Open Up a Weapon Shop

The main character, Luke, has been an adventurer for fifteen years, but he could only use the skill [Repair]. Because of that, he was known as the eternal rank E, third-rate adventurer.

One day, Luke was hired for cheap by a hero’s party to do odd jobs, when he was forced to bear the consequences caused by the hero’s mistake, and was left behind in the labyrinth of a difficult-to-clear dungeon.

Luke was prepared for death, but his [Repair] skill evolved during his survival from the brink of death, and Luke managed to escape.

Now that Luke had returned alive, he decided to stop doing dangerous jobs and turned over a new leaf.

Using his evolved [Repair] skill, Luke opened up a weapon shop for adventurers in a village with a small dungeon.

……at least, that’s what he thought, when a major incident shaking the entire country appeared before Luke’s eyes…..?