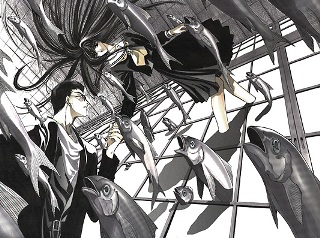 The story is about Tatsumi Houjyou, the protagonist, seeking her place in the world after her parents' deaths, which leave her as the last yumegari or dream hunter able to enter the dreams of others and intervene. She can't do this work alone, however: she must be watched over by a yumemori or dream seer, a person who watches the dreams of the yumegari him/herself, and keep them from falling into eternal sleep. Her mother was the yumegari while her dad was the yumemori, and they fell victim to the work together...

Tatsumi finds out who her yumemori is: Kyousuke Kaga, a novelist in his 20's who lives in Tokyo. Despite the warnings of the Houjyou clan, who can't find anything on him, she goes to Kyousuke and soon moves into his Big Fancy House. From then on, Tatsumi and Kyosuke begin working to reach a better understanding of their shared destiny...

Here's a bit more of info

, and here you have some translations.

Yumegari has the following tropes: