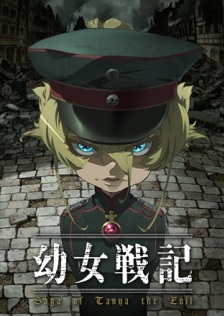 Tanya von Degurechaff: But we are soldiers, and if orders say we must burn beautiful Arene to the ground, that is what we must do.
Commander Mortiz Paul von Han: Who would want to be a soldier, huh?

No, the truth is much stranger and far more terrifying. For she was...a male HR manager in modern Japan.

Youjo Senki (War Chronicles of A Little Girl) is a Light Novel series created by an author under the pseudonym Carlo Zen in 2013. In 2016 it received a manga adaptation by Toujou Chika, whose previous work consist of the Code Geass: Oz the Reflection spin-off series. It has also received an Animated Adaptation under the title Youjo Senki: Saga of Tanya the Evil, premiering on January 6th, 2017. It is the first show produced by studio NUT, which is mostly compromised of talents from Gainax and Madhouse. It is available for worldwide streaming on Crunchyroll. Funimation's Simuldub began on Jan 23, 2017, and a new dubbed episode is released every Monday, here

The main characters are part of the crossover Isekai Quartet, alongside the casts of KonoSuba, Re:Zero, Overlord (2012), and as of the second season season, The Rising of the Shield Hero.

A Communist Game of Telephone

Everyone is so afraid to deliver bad news up the chain of command that a request for artillery support ends up completely lost.

A Communist Game of Telephone

Everyone is so afraid to deliver bad news up the chain of command that a request for artillery support ends up completely lost.