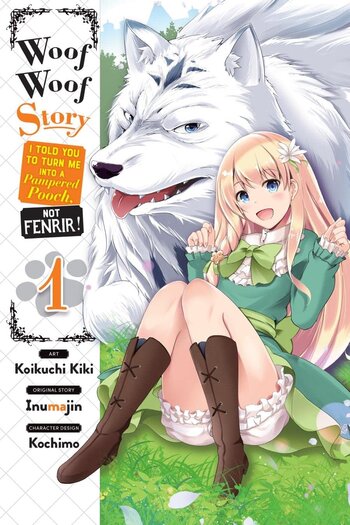 Woof Woof Story, subtitled I Told You To Turn Me Into a Pampered Pooch, Not Fenrir! is a comedy isekai series of Light Novels written by Inumajin and illustrated by Kochimo. It follows the new life of overworked salaryman Ryouta Okami, whose dying wish was to be reborn as a pet dog and lounge around eating treats all day. And since Heaven was running a promotional campaign that day, that's exactly what he got.

The goddess overseeing Ryouta's case- being more accustomed to the requests of gamers and would-be heroes- decided to add in a few 'perks'. Like a gigantic wolf body. And immortality. And a mouth laser.

Now Routa must struggle to keep the pretense that he is a normal dog, and with it his luxurious life.

The series was published from 2017 to 2020, with a total of seven volumes. The light novels and the manga adaptation were localized by Yen Press in February 2019.

I guess this is what you’d call postcoital clarity.