This page contains unmarked spoilers for Spice and Wolf. You have been warned! 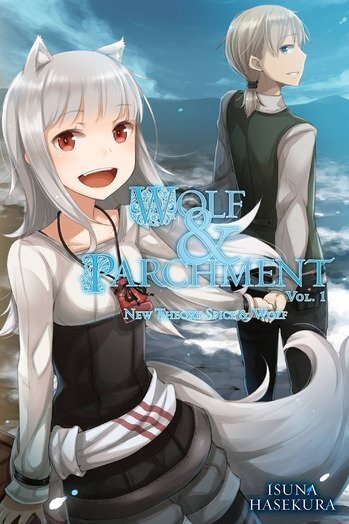 "Wolf on the parchment."
Advertisement:

Since his childhood, Tote Col has wanted to become a priest. Part of that is because he's genuinely devoted, but his main reason is because he wants to reform the Church from the inside out. However, various events kept him from being able to realize this dream.

Fifteen years have passed since he initially set out on his quest. He now has a stable home and workplace in Kraft Lawrence and Holo's bathhouse. Throughout all that time, he never gave up on his dream. After saying his goodbyes, he sets off to begin the long journey into seeing his dream come true.

There's just one little problem, one that comes in the form of a young half-human, half-wolf spirit. Her name is Myuri, Lawrence and Holo's only daughter. Though he plans to get her to go back home, Myuri is adamant to join in on his adventure. Unable to convince her to return and appreciating her company anyway, Col lets her tag along.

As their journey continues, Col and Myuri's fortitudes will be tested in the face of the church's greed and fearmongering; for if anyone finds out about Myuri's true nature, things will go south real fast.

Wolf and Parchment: New Theory Spice and Wolf (新説 狼と香辛料 狼と羊皮紙, Shinsetsu Ookami to Koushinryou: Ookami to Youhishi) by Isuna Hasekura is a next generation spin-off of Spice and Wolf. It began in 2016 as a way to celebrate its parent series' tenth anniversary, and is currently ongoing. A manga adaptation began in 2019 with art by Hidori. Both the light novels and manga's English translations are available through Yen Press.