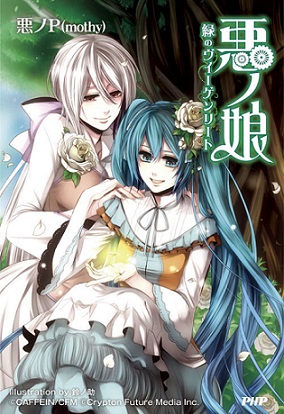 "I'm sorry for being alive"

The Daughter of Evil: Wiegenlied of Green is the second Light Novel in The Daughter of Evil Light Novel series of the Evillious Chronicles franchise, a part of the Story of Evil series within said franchise. It was written by the Japanese producer Akuno-P (mothy) and illustrated by Ichika (cover done by Suzunosuke), released 2011. The novel was sold along with a short story manga taking place within the events of the novel, called "Novelette of White." In 2014 PHP made a re-release of the novel with several revisions from mothy which expanded on several scenes.

Serving as a P.O.V. Sequel to the novel Clôture of Yellow, the story centers around the forest spirit Michaela and how she came to be killed in the Green Hunting, becoming human as a means to help the sorceress Elluka Clockworker and befriend the lonely village pariah, Clarith. As time goes on, she begins to understand for herself the joy of human relationships and their passionate feelings; unfortunately, as she isn’t going to last long as one.

While Michaela is the central protagonist, the story also develops the character of Elluka Clockworker introduced in Cloture, elaborating on her quest to find and seal the Demons of Sin; following Michaela's death, the plot also switches to Clarith as she tries to cope with the loss. The light novel is followed by Praeludium Of Red.

The story, in addition to Clôture of Yellow, has now received a manga adaptation by Ichika, the first volume of which is fan translated here

. The website for the novel can be found here

(note, however, that it's all in Japanese) and is available on Amazon. An unofficial English translation of the light novel's revised version can be found here