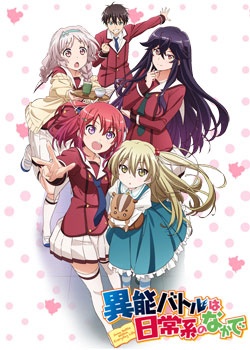 Six months ago, the four members of a literature club, as well as the elementary school niece of their club adviser, were bestowed with supernatural powers. Jurai Andou, the only male, became able to produce rather useless black flames. The girls also acquired a variety of powerful abilities: the bemused Tomoyo Kanzaki became a Time Master, the ditzy Hatoko Kushikawa gained Elemental Powers, Chifuyu Himeki, the youngest of the group, acquired the Power of Creation, and the aloof Sayumi Takanashi could repair objects or heal living things (though it's actually returning it to its original state). However, since they gained these powers, nothing has actually changed in their everyday life. Why have they been given these powers in the first place? Will the heroic fantasy life that Andou imagined these powers would bring ever actually arrive?

When Supernatural Battles Became Commonplace (異能バトルは日常系のなかで, Inō-Batoru wa Nichijō-kei no Naka de) is a 13 volume Japanese light novel series by Kota Nozomi with illustrations by 029. A manga adaptation with art by Kōsuke Kurose began serialization in Kadokawa Shoten's Comp Ace from September 2013. An anime television series adaptation by Trigger began airing as a part of the Fall 2014 Anime season.