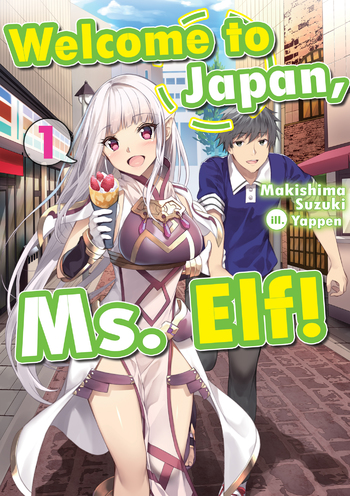 The world-hopping man and his cute elf friend.
Advertisement:

Kitase Kazuhiro is a normal 25-year-old salaryman with one strange talent: since he was a child, when he sleeps, he always dreams of being in a fantasy world where he can go on an adventure, and that world is persistent. Thus, his hobby is sleeping so he can always explore the world in his dreams. One day, he dreams about going on exploring a ruin with his elf friend Mariebelle (Marie for short), when they stumble upon a sleeping ancient arkdragon guarding her eggs. While trying to escape, the dragon wakes up, notices them, and proceeds to burn them to death, with Kazuhiro hugging Marie, trying to protect her...

And then he wakes back up in Japan, and upon looking at his own bed, he finds, lying by his side, Marie, buck-naked.

The original web novel (in Japanese) can be found here

by J-Novel Club. There is also manga adaptation by Aono Sumio.