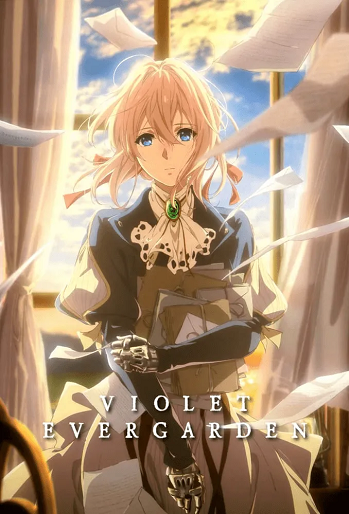 For the people who don't understand 'love'.
"Pleased to make your acquaintance. I rush anywhere my customers desire. I am from the Auto-Memory Dolls service, Violet Evergarden."
Advertisement:

It is the end of a brutal war that has engulfed the continent of Telsis. As the people and nations of the land attempt to recover and rebuild, a girl who has known nothing but death and violence begins a new life at the CH Postal Company in the grand city of Leiden, capital of Leidenschaftlich.

What few know is that this beautiful young lady, Violet Evergarden, was formerly known as the "Battle Maiden of Leidenschaftlich," who served with distinction in a special operations unit under Major Gilbert Bougainvillea's command in Leidenschaftlich's Army. In the final battle of the war, Violet loses both her arms and her Major, and after recovering from her injuries, is taken under the care of former army officer Claudia Hodgins, the founder of CH Postal. In addition to fielding regular mail services, CH Postal also employs Auto-Memory Dolls, skilled typists who ghostwrite letters for the illiterate and for those who seek help expressing their feelings through words.

Having lost all meaning in her life, and seeking a new purpose for herself and her now-mechanical arms in a now-peaceful country, Violet joins the Auto-Memory Doll team, where she will learn to rediscover her lost emotions and understand the meaning behind the Major's final words to her: "I love you."

Violet Evergarden is a Japanese light novel series by Kana Akatsuki, illustrated by Akiko Takase, and first published under the KA Esuma Bunko imprint in December 2015. It was adapted into a 14-episode animated TV series by Kyoto Animation, with the first episode premiering on January 10, 2018 in Japan, and on January 11, 2018 worldwide through Netflix. It was directed by Taichi Ishidate, with Reiko Yoshida serving as series composer, Takase returning as character designer and chief animation director, and Haruka Fujita as series director.

The novels consist of the following:

An original video animation episode was released in July 2018, followed by a spin-off film entitled "Eternity and the Auto Memory Doll" in September 2019. Another anime film was initially scheduled for a January 2020 premiere, but was then moved to April 24, 2020, on account of the July 18, 2019 fire at KyoAni's 1st Studio building. The rise of the COVID-19 coronavirus pandemic postponed the movie again, but it finally got released in Japanese theaters on September 18, 2020. It received an international Netflix release on October 13, 2021, the same day its Blu-ray was released in Japan.

Oscar recounts the moments he spent with his late daughter, up until he was struck with the same illess as Oscar's wife and their last moments together. His recounting over Olivia's death and being unable to move on from daughter's death causes Violet to become emotional about the idea of a parent losing their child.

Oscar recounts the moments he spent with his late daughter, up until he was struck with the same illess as Oscar's wife and their last moments together. His recounting over Olivia's death and being unable to move on from daughter's death causes Violet to become emotional about the idea of a parent losing their child.