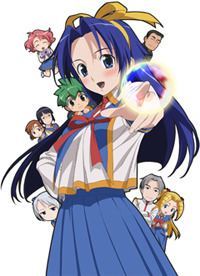 Venus to Mamoru!, also known by its Japanese title Mamoru-kun ni Megami no Shukufuku wo! (護くんに女神の祝福を!?, lit. To Mamoru-kun, the Blessings of the Goddess!), or Mamoru was Blessed by a Goddess! is a series of Light Novels made into an anime series by ZEXCS that ran for 24 episodes in 2006.

Mamoru Yoshimura has just joined Tokyo Beatrice University. Beatrice is the Background Magic Field in this world that certain people can use. On his first day, he is asked out by Ayako Takasu, known on campus as the "Angel of Death". He discovers that, despite her reputation, she's really quite a nice person, just tsundere and has never opened up to anyone before.

With the two of them an Official Couple, Mamoru joins the school's Absurdly Powerful Student Council to investigate incidents around the school. In the process, he tries to keep Ayako's temperament under control and to know her better. The younger sister of one of Ayako's rivals joins the Council later due to her admiration of Ayako.

Compare Kanokon, which has a similar Love Triangle set up, but is Hotter and Sexier.