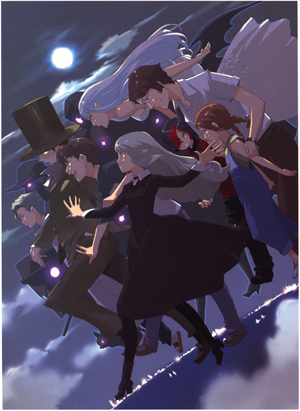 The island of Growerth in northern Germany is home to Viscount Gerhardt von Waldstein, a vampire who rules the island as the Master of the Night. His accepting and merciful character has naturally attracted many nonhumans to the island in search of a place to call home. All sorts of colorful characters, from fellow vampires to witches, werewolves, and even Eldritch Abominations, inhabit Waldstein Castle. Chief among its residents, however, are the viscount's family—his twin children Relic and Ferret.

Only a slight distance from the castle is the city of Rukram, whose mayor is a trash-talking Dhampyr with a bone to pick against the viscount. Oh, there also seems to be a young woman with a taste for vampires' flesh, a shapeshifter with a complex about his true form, and a Salaryman with a knack for magic tricks.

And then there's the mysterious Organization—a group of vampires plotting... something. No one quite knows what they're up to, not even the members themselves.

A vampire series by Ryohgo Narita, Vamp is an early instalment in Naritaverse, along with Baccano! and Durarara!!. The series is currently running at five volumes, and has not yet received an anime adaptation. It was briefly licensed by Seven Seas but was abandoned. A fan translation can be read here

Vamp is part of an overarching Verse of light novels written by Narita Ryohgo that includes Baccano!, Durarara!!, Hariyama-san, and Etsusa Bridge.

Tropes in Vamp! include: