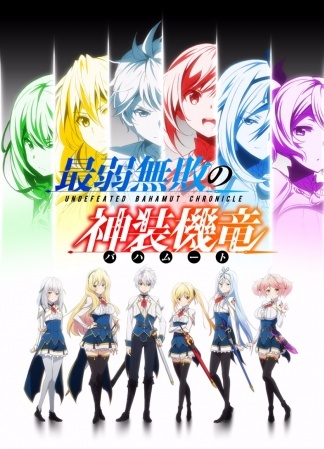 Lux Arcadia is a prince — or rather, was the seventh Crown Prince of the Old Arcadia Empire, which collapsed five years ago following a catastrophic coup d'état. Now, he is living at the mercy of the New Kingdom Atsimata, the new ruling power of the realm, forced to do multiple odd jobs to pay off a staggering debt worth one-fifth of the national budget, both for his and his sickly younger sister Airi's sake.

On one job, however, he crashes into a bathhouse and falls upon Princess Lisesharte "Lisha" Atsimata, who is naturally nonplussed, challenging him to a duel of Drag-Knights, wielders of Drag-Rides, ancient mechanical combat suits found in ruins around the world. However, their duel is interrupted by an Abyss, enigmatic monsters that wrought havoc to the world. Lux, known as the "Weakest Undefeated" for his passive fighting style, fends off the monster long enough to help Lisha defeat it.

Following his performance, Lux is admitted into a prestigious, all-female Drag-Knight academy Lisha and Airi were studying in, where he meets a lot of friends, enemies, and suitors, even as he and Lisha confide to each other terrible secrets, some of which go all the way back to the Old Empire.

Undefeated Bahamut Chronicle ("最弱無敗の神装機竜" / "Saijaku Muhai no Bahamut" / "Bahamut the Weakest Undefeated") is a light novel series written by Senri Akatsuki and illustrated by Ayumu Kasuga (Gonna Be the Twin-Tail!! and Castle Town Dandelion) which published from August 2013 to August 2020 and concluded with 20 volumes. The series has a manga adaptation that ran for 11 volumes from December 2014 to May 2018 and an anime adaptation from the Winter 2016 block, directed by Masaomi Ando for Lerche (Assassination Classroom).

The series has two wikis here

Note that spoilers for the first five volumes (which were covered by the anime) are unmarked.