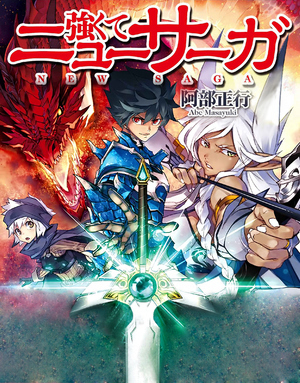 Tsuyokute New Saga, roughly translated to, A New, Stronger Saga is the story of the hero Kail, the leader of an elite fighting squad formed by what remains of the human alliance as they face eradication at the hands of the Demon Lord and his army. Kail and his friends do manage to defeat the Demon Lord, but Kail is the only one who survives long enough to deliver the finishing blow; even his talking sword is damaged enough to kill the spirit within. On the verge of death, Kail reaches out to an artifact that the Demon Lord seemed particularly concerned about...

And awakens four years in the past.

His Doomed Home Town, once wiped out in a Demon attack of which he had been the Sole Survivor, is as it once was. Every one of his loved ones are alive and well, and Kail has even been aged down. When he realizes what has happened, Kail resolves to use his knowledge of what is to happen in order to win humanity a more conclusive, less costly victory against the Demon Lord's army. Uniting the forces of humanity about a threat they do not know is coming will be no easy task, especially since Kail's physical strength is no longer what it was when he defeated the Demon Lord. This head start may get him the chance to right the future, but in delving into the backstory of his previous adventure he starts to learn the dark secrets behind his friends' lives and the world.

Both the light novels and manga are published by Alphapolis.