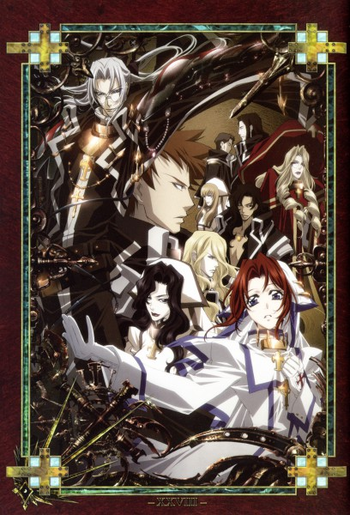 "Humans feed on birds and cattle, Vampires on the lifeblood of Humans. Didn't it ever occur to you that there might be something yet higher on the food chain?"
Advertisement:

Trinity Blood originally began as a series of Light Novels penned by the late Sunao Yoshida, which were later adapted into a manga and anime series. The manga is known for its lush and Baroque artwork by Kiyo Kûjô; and the anime adaptation is similarly lavish in its visuals and animation quality.

The anime continuity opens on a time far into the future, 900 years after a disaster which nearly destroyed Earth's population. The Catholic Church has re-emerged as a major military superpower and is currently waging a Cold War against the Methuselahs, a vampiric race composed of humans which have been infected with an alien bacillus. (Said bacillus prolongs the victims' lives, grants them magical powers and super strength, at the cost of being vulnerable to sunlight — and leaves them constantly hungry for human blood, hence the reason they're considered such a nuisance.)

It is not uncommon for stark, be-trenchcoated heroes to emerge during times like this. However, the main be-trenchcoated hero of this story appears anything but heroic at first glance. In fact, Father Abel Nightroad seems a bit of a ditz, although under the right circumstances, his true form will show itself. (His true form being that of a Crusnik, a powerful and monstrous being which feeds on vampires the way vampires feed on humans.)

The series isn't just about Father Nightroad kicking vampire ass for the Lord, though. There's also plenty of intrigue going on in both the Vatican and Methuslean camps. And a shadowy conspiracy called the Order of Rosenkreuz, which seeks to bring about The End of the World as We Know It. Again.

It's probably worth noting that one of the reasons the anime is so light on content is because the original author died before the series could be finished. And the mangaka aren't really sure how to finish the series well enough so as to honour the author and keep the fandom happy. The manga ended on April 2018 with 21 volumes.