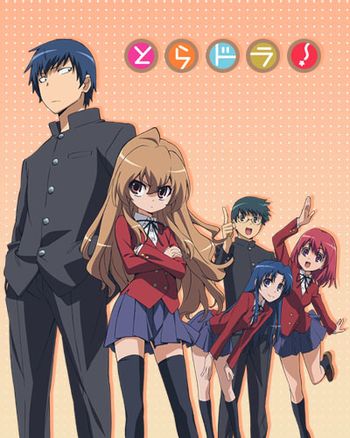 The principal cast. From left to right: Ryuuji Takasu, Taiga Aisaka, Ami Kawashima, Yuusaku Kitamura, and Minori Kushieda.
"In this world, there's this... thing that no one's ever seen. This thing, it's very kind and gentle, and if anyone could actually see it, there'd be a whole bunch of people wanting to have it. Maybe that's why the world keeps it hidden from everyone; if it's hard to get, that makes it even more special. Yeah, but one day, someone will find it... and whoever does, they'll be the one who was supposed to find it. Because that's the way it's meant to be."
— Opening lines of the NIS America anime dub

Ryuuji Takasu is a really misunderstood high-schooler with a somewhat romantic nature and a low tolerance for uncleanliness. Unfortunately, he inherited the evil-looking eyes and facial structure of his Yakuza father, which makes people think he's a delinquent, or at least someone you don't want to mess with. People who bump into him on the streets offer him their wallets, and when he grins, everyone in the vicinity retreats to eight feet away.

As the new school year starts, Ryuuji finds himself in the same class as his friend Yuusaku Kitamura, and his crush Minori Kushieda (whom he is too bashful to approach). His class also includes Minori's best friend: Taiga Aisaka (a.k.a. the "Palmtop Tiger"), the infamous pint-sized terror of the school with a fuse even shorter than her stature.

After an unfortunate first encounter that ends with Taiga KO-ing him, Ryuuji finds out at the end of the school day that Taiga has put a love letter to Kitamura (whom she has a crush on but is too bashful to approach) in his bag by accident. This leads to Taiga breaking into his house that night to retrieve the letter and/or kill him, only to discover that she forgot to put the letter in the envelope and has inadvertently outed her crush on Kitamura to Ryuuji.

After much ado and a few sword-blows, Ryuuji and Taiga strike a tenuous deal: to use their positions as The Best Friends to help each other bag their respective crushes. Hilarity Ensues.

Toradora! (とらドラ!) is a 2006-2009 light novel series written by Yuyuko Takemiya and illustrated by Yasu, spanning 10 volumes. It was later given an ongoing 2008 manga series illustrated by Zekkyou (both the manga and light novels are licensed in North America by Seven Seas Entertainment) and a 25-episode anime adaptation by JC Staff in 2009 (plus an OVA episode created in 2011 for the Japanese Blu-ray release of the series) and the visual novel Toradora! Portable for PlayStation Portable based in the anime made in 2009 by Bandai Namco Entertainment.

The anime was initially released in North America by NIS America as a sub-only version to help lower their production costs. United States residents can catch the subbed and dubbed version on Crunchyroll.

However, in 2014, NIS America re-released

the series in a Blu-Ray premium and standard edition, much to the shock and surprise of the fans (this is also their first anime dubbed into English as well).

Taiga was chosen to represent Toradora! in the crossover Fighting Game Dengeki Bunko Fighting Climax by Sega, where she uses chairs, baseball bats, wooden swords, and other items from the light novel. Ryuuji was chosen as one of the support characters.

Example of:
The Napoleon