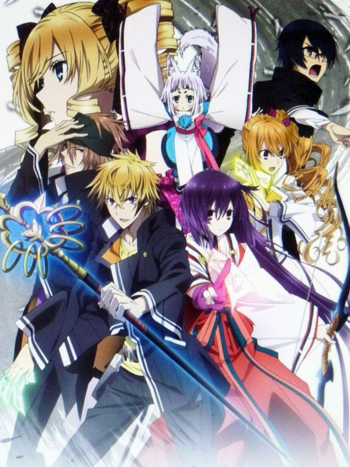 In World War II, the Japanese military approached the genius onmyoji Yakou Tsuchimikado, seeking new weapons to further the country's ambitions of becoming a world power. With their resources he was able to rewrite the book on magic, creating a modernised form of Onmyōdō with incredible power. Yakou was regarded as a hero or even a figure of worship... until he brought about the Great Spirit Disaster in Tokyo during a Last Stand to avert Japan's defeat. While Yakou died in the Disaster, magic and Magitek derived from his teachings are still in use today.

Harutora Tsuchimikado comes from a branch of the same prestigious family as Yakou, but his ability to detect spirit energy is zero. Since he has no interest in becoming a proper onmyoji nor obligation to do so, he's been enjoying a peaceful daily life with his friends at a normal high school. And then one day his childhood friend Natsume Tsuchimikado, heir to the head family, suddenly appears...

Toky Ravens is a Japanese light novel series written by Kōhei Azano and illustrated by Sumihei, currently running since 2010. A manga adaptation ran from 2010 to 2017, with several spinoffs released until 2015, while a 24-episode anime adaptation aired in October 2013.

Example of:
Bitch in Sheep's Clothing