Light Novel / There Was No Secret Evil Fighting Organization 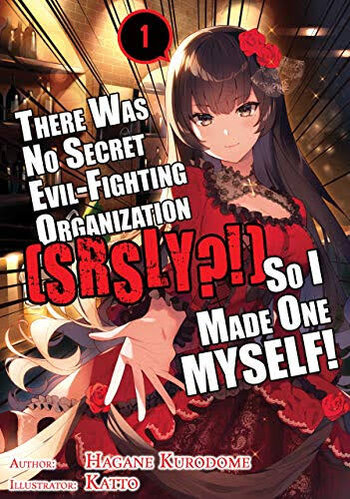 Welcome to Amaterasu.
You know this story. One day, out of the blue, an Ordinary High-School Student named Kinemitsu Sago develops telekinesis. It is an incredible power, a power out of the Light Novels he loves so much, a power sure to sweep him into a life of heroism and intrigue.
Advertisement:

Then...nothing happens. No Ancient Conspiracy steps out of the shadows to recruit him. No aliens invade Earth. No lovely Magical Girlfriend shows up to give him the Call to Adventure. Not even levitating 7-ton buses breaks the monotony of Sago's utterly adequate, ordinary life.

So he waits. He trains. Not wanting to out himself to the media, he graduates school and takes up a mundane white-collar job.

But the old obsession still burns in his heart. Frustrated beyond endurance, Sago vows to himself: "I will be the supernatural organization!"

Sekai no Yami to Tatakau Himitsu Kessha ga nai kara Tsukutta (Hangire) (translated in English as There Was No Secret Evil-Fighting Organization (srsly?!) So I Made One MYSELF!) is a comedy series written by Hagane Kurodome. Originally released online, it received a Light Novel adaptation that was Cut Short after two volumes. The official English translation

covers both published novels (released commercially through J-Novel) and then continues into web material (released for free on the translator's personal blog). A separate Fan Translation of the start of the Web Novel and some sidestories also exists

This series was among several light novels cut

from Amazon.com, but has now been restored.

This series has been forced to invoke the following tropes: