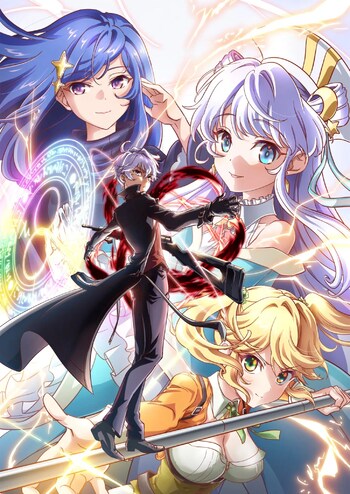 The World's Finest Assassin or The World's Finest Assassin Gets Reincarnated in Another World as an Aristocratnote Using the latter did not allow the trope article to be generated is a Light Novel written by Rui Tsukiyo (Redo of Healer) and illustrated by Reia. It was serialized in 2018 under the user-generated novel publishing website Shōsetsuka ni Narō before Kadokawa Shoten acquired the rights to publish it. A Manga adaptation with art by Hamao Sumeragi was published by Kadokawa Shoten's Young Ace Up website from January 2019.

An Animated Adaptation by Studio Palette and Silver Link aired in Japan on October 2021, directed by Masafumi Tamura with scripts written by Katsuhiko Takayama. Crunchyroll has the rights to stream it worldwide except for South/Southeast Asia, where Muse Communications in charge.

Once upon a time, an aging and experienced assassin named Allen Smith conducted One Last Job alongside an apprentice named Mila Martinez. He then planned to retire and pass his skills to future assassins. But while on a flight from Los Angeles to Tokyo, the plane he was on was supposedly hijacked. He finds out that the hijacking was a ruse arranged by his bosses as they see him as expendable. While Allen tries to fly the plane to avoid crashing it, a US Air Force F-16 was dispatched to take it out under orders of terrorism threats of the hijacked airliner to crash it onto critical infrastructure. Allen dies in the missile strike with several other people on board, including Mila.

And as he's dying, he experiences his first emotion: frustration.

However, a mysterious Goddess saved him at the last minute to offer him two choices: Either be reborn somewhere else with no memories. Or be reborn in the peak of human skills and attributes, but in return he must kill the Hero within 18 years after his birth. He accepts the job and gets reborn in the nation of Alvan as Lugh Tuatha Dé.

The World's Finest Assassin Gets Reincarnated in Another World as an Aristocrat has the following tropes: