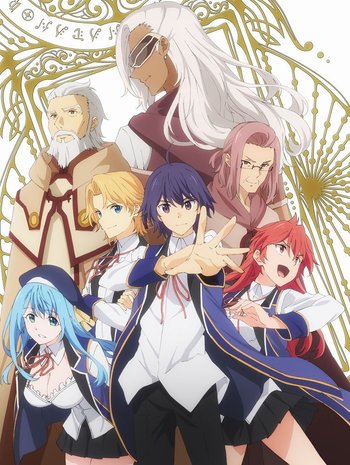 "Just Your Average Day At Magical Highschool in Another World"
"I forgot to teach him common sense!"
— Merlin Walford about his grandson, Shin

Before reincarnating to this fantasy world, Shin Walford was a hardworking employee back in his original world until he got hit by a truck. Reincarnating as a baby in the fantasy world, Shin's real family in said world were murdered by some monsters during their travel in the forest. Fortunately, Shin was adopted by an old wanderer who reveals himself to be Merlin Walford, one of the Living Legends from Earlsheid Kingdom who defeated a rampaging demon.

Shin grew up to be a great young boy due to both Merlin and his wife, Melida, treating Shin well until his 15th birthday. He learns all kinds of powerful magic from his grandfather and seemingly masters some pretty powerful spells by himself to the point he even surpasses his grandfather.

However, there are two things that Merlin forgot to teach: "Common sense and Social Skills" so that Shin could adapt to society. Fortunately, Merlin's friend, King Diseum von Earlsheid, enrolls Shin into a prestigious magic academy not only for learning how Shin's skills are different compared to other magic users, but also to help Shin fit into society and make friends.

The Wise Grandsonnote or better known with other names such as Philosopher's Grandson or The Sage's Grandson. (賢者の孫 Kenja no Mago) is a currently ongoing Light Novel from 2015 and Manga written by Tsuyoshi Yoshioka while having two different illustrators, as the Light Novel is illustrated by Seiji Kikuchi, while the manga itself is illustrated by Shunsuke Ogata. An anime adaptation by SILVER LINK. was broadcast on April 10, 2019, and ran for 12 episodes.

Said anime is available on Crunchyroll, under the title The Wise Man's Grandchild.

Tropes for this series