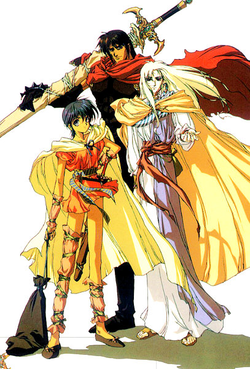 The Weathering Continent (Kaze No Tairiku) is a series of fantasy Light Novel authored by Sei Takekawa and illustrated by Mutsumi Inomata.

The series is best known in the West for the 1992 animated film produced by Production I.G (then known as I.G Tatsunoko) and written/directed by Koichi Mashimo. It was released in the U.S. by Media Blasters.

Living on a continent devastated by centuries of catastrophes; Bois, Tieh, and Lakshi are travelers heading towards Haelle Kine, where they hope to find water. After encountering a group of people who were recently murdered (quite gruesomely) and a survivor who dies due to fatigue and starvation (in addition to the two arrows in her stomach), they find themselves in the cursed Azec Sistra, a city built for the dead. Legends says that no one has ever left this city alive...