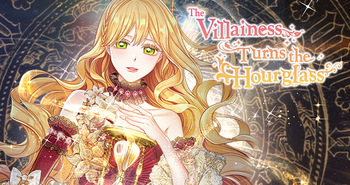 ''The Villainess Reverses the Hourglass'',

also known as The Villainess Turns the Hourglass and Agnyeoneun Molaesigyeleul Doedollinda (Korean: 악녀는 모래시계를 되돌린다), is a web novel by Sansobee. It is about the revenge of Aria Roscent, the daughter of a prostitute who married a wealthy count.

With the marriage of her prostitute mother to Count Roscent, Aria’s status in society skyrocketed immediately. After leading a life of luxury, Aria unfairly meets death because of her sister Mielle’s schemes. And right before she dies, she sees an hourglass fall as if it were a fantasy. And just like that, she was miraculously brought back to the past.

“I want to become a very elegant person, just like my sister, Mielle.”

In order to face the villainess, she must become an even more wicked villainess. This was the new path Aria chose to take revenge on Mielle who murdered both her and her mother.

The web novel ran from June 2017 to June 2018 (209 chapters total), and was published in four volumes with an additional fifth volume (which is eBook only). Sansobee added some extra web chapters in 2020 (32 of them). It has been adapted to a webtoon,

illustrated by Ant Studio, which began in March 2020. The novel has been licensed in English by Qidian International

and the webtoon by Tapytoon,

however, volume five and the 2020 extras have not been translated.