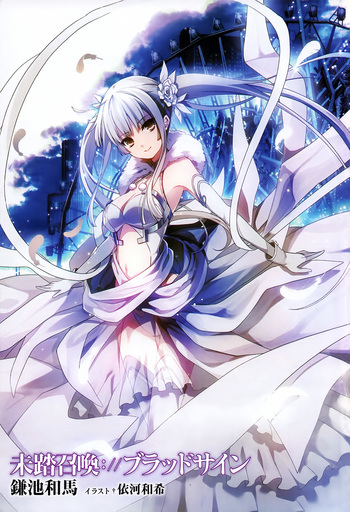 Immediately before the turn of the millenium, the Third Summoning Ceremony was discovered. This allowed the gods and other legendary figures of myth to be summoned at the convenience of humans, to do their bidding. But unlike the First and Second Summoning Ceremonies, summoning a being to take over one's mind, and summoning a being into a summoner's body to perform magic, respectively, this new method went further - it allowed beings beyond the gods to be summoned, and replacing someone's place in the world, allowing summoners to command the summoned beings to use any power at their disposal. The beings beyond gods became known as the Unexplored-Class, and at the apex of these stands the White Queen who Wields the Sword of Unsullied Truth.

Two new professions appeared in the wake of this discovery: summoners and vessels. Summoners made use of two tools - the Blood Sign and the Incense Grenade - to conduct the summoning ceremony. Through this, they called in Materials, the denizens of the world of myth, and bound them to their vessels. The result? Beings of supernatural might, impervious to any mundane threat, and all under the control of the summoner and vessel. In addition, both summoners and vessels gained another quality: whenever they left the sight of ordinary people, they would fade from their memory. This was just as much a curse as it was a blessing, as it meant that they were fundamentally cut off from the normal world.

As with many other discoveries in human history, the summoning ceremony was inevitably used in war. Hidden from the outside world, summoners engaged in countless conflicts against each other. Three great factions formed: Government, an organisation of various nations and major corporations; Illegal, a motley collection of large criminal organisations; and Freedom, a group of summoners and vessels who followed their own paths. Each of these factions became associated with an Unexplored-Class Material. As a member of one of the factions fought and gained achievements in combat, they could be gifted with Awards by the Material that oversaw their faction. It became rumored that a summoner who could obtain a thousand Awards - who could become Award 1000 - would transform into an immortal Material themselves.

The Unexplored Summon://Blood Sign is a light novel series by Kazuma Kamachi. It is complete at ten volumes. It follows the legendary summoner, Kyousuke Shiroyama, also known as "Alice (with) Rabbit". Kyousuke has managed to achieve Award 902, but has a critical weakness: he's unable to resist what he calls the 'cursed words', "help me". As the series begins, he plans on retiring from summoning... but the world isn't about to let him off that easily.