This page contains unmarked spoilers for volumes 1 through 7. You Have Been Warned! 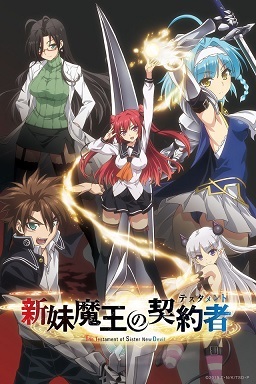 Basara Tojo is a high school student whose father has suddenly just remarried. His father then departs overseas leaving Basara with two new beautiful step-sisters. Little does he know, his new sisters, Mio and Maria are actually the new Demon Lord and a succubus!? Almost trapped into a life of servitude, Basara forms a reverse contract by accident and ends up becoming Mio’s master! Hilarity Ensues as Basara finds himself in one ecchi situation after another. However, Mio’s life is in danger as she is pursued by demons and heroes!

The light novel series itself ended with 12 volumes in 2018, with a 13th volume serving as a Grand Finale in 2021. A compilation movie came out the same year, and a third OVA titled The Testament of Sister New Devil Departures released in March 2018. It also spawned a manga adaptation illustrated by Kashiwa Miyako, which spanned a total of 9 volumes. A spinoff manga adaptation, The Testament of Sister New Devil: Storm!, also spawned; it was illustrated by Fumihiro Kiso, and spanned 5 volumes.

The first season of the series was English dubbed and released on home video by Funimation in 2017.

Please move any character tropes to the proper character page. If there is a The Testament of Sister New Devil character, it's probably in that index somewhere.

The Testament of Sister New Devil provides examples of: