Light Novel / The Story of Saiunkoku
aka: Saiunkoku Monogatari 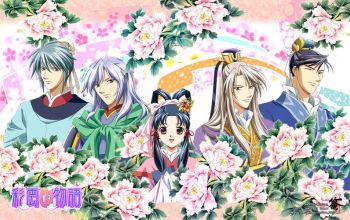 The Story of Saiunkoku (JP: Saiunkoku Monogatari), also known as Colourcloud Palace in some areas, is a series of short novels by Sai Yukino that has been adapted into a two-season-long (78 episodes) anime (NHK, 2006–08), and a manga. The series is set in Saiunkoku, an ancient China-esque country divided into eight provinces named after colours, with eight noble families to match: Kou (crimson; "Hong" in the English versions), Ran (blue), Heki (green), Ko (yellow; not to be confused with the other Kou, which uses a different kanji), Haku (white), Koku (black), Sa (brown), and Shi (purple; the ruling family).