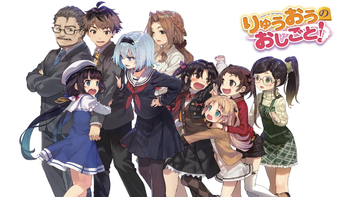 Yaichi Kuzuryu is the youngest titleholder in the Shogi world—having won the "Ryuuo" Title, the most prestigious title and an indicator of the strongest Shogi player, at the age of 16. However, since the Ryuuo title match, Yaichi has been experiencing a string of defeats and losses with an established win rate of 30%. Not helping his reputation is that his one victory against his former master ended with the latter having a complete Potty Failure that he and fellow apprentice Ginko Sora had to clean up after.

Now in a tight spot, Yaichi returns to his apartment one day and finds a 9-year old girl inside, Ai Hinatsuru, who claims to want to be his apprentice. Now with the responsibility of taking an apprentice, can Yaichi regain his status as the strongest? Or will his reputation further plummet for completely different reasons?

The Ryuo's Work is Never Done! (Ryuo no Oshigoto!) is a series of Light Novels written by Shirow Shiratori and illustrated by Shirabii, which began in 2015. The series can be read in english in an E-Book format in Bookwalker.

The series also has a manga adaptation which ran from 2015 to 2019 in Young Gangan, and it received an anime adaptation with 12 episodes that premiered in January 8, 2018 by Project No. 9. The anime can be viewed on Crunchyroll here

The Ryuo's Work is Never Done provides examples of: