Light Novel / The Rising of the Shield Hero 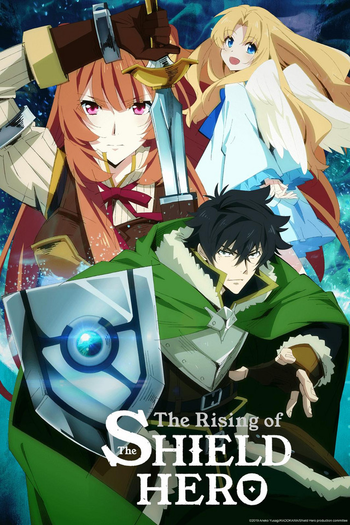 From left to right: Raphtalia, Naofumi, and Filo.
Advertisement:

The Rising of the Shield Hero (盾の勇者の成り上がり Tate no Yuusha no Nariagari) began as an ongoing Web Novel on "Let's Become a Novelist" written by Yusagi Aneko and illustrated by Seira Minami, with over 900 chapters released as of 2019. The series was later picked up by Media Factory Books with the first volume published on 22 August 2013. The series currently has twenty-two volumes and a drama CD out.

Naofumi Iwatani, an Otaku from present day Japan, was summoned into a parallel world along with three others to become Heroes and protect it from calamity. Each of the four Heroes receive a legendary weapon unique to them, with Naofumi becoming the Hero of the Shield. However, the Shield was looked down upon as useless, so Naofumi was left without companions, while the other Heroes gained several. One person, the beautiful Princess Malty S. Melromarc, took mercy on Naofumi and agreed to fight by his side, but within one day she had betrayed him, robbing him of his stuff and falsely accusing him of one of the vilest of offenses. His name dragged through the mud and treated like a criminal by the people he was summoned to save, Naofumi becomes unable to trust anyone.

With no one willing to associate with him, Naofumi is forced to resort to purchasing slaves. He buys a tanuki demi-human girl named Raphtalia and an egg who hatches into a Filolial, who he names Filo. He also recruits Rishia Ivyred, the daughter of a fallen noble, and the Hakuko siblings Alta and Fohl Fayon. Like this, his journey in a parallel world begins, as he and his companions must venture through the world, solving the mystery of the Waves that threaten the fabric of reality, fighting against the bigotry and institutionalized discrimination that demi-humans face at the hands of humans, and eventually seeking revenge on Malty.

The light novel three side-stories and a spin-off web novel, The Reprise of the Spear Hero. A manga series of side-stories called A Day In The Life Of The Shield Hero began on Seprember 27, 2018.

An anime adaptation was announced on July 7 2017. It premiered on January 9, 2019 and ran a total of 25 episodes. On September, 2019, Crunchyroll announced that it's been renewed for a second and third seasons

. The second season was originally set to premiere during 2020. It was rescheduled for October 2021, but got delayed again to April 2022.

of the crossover Isekai Quartet during its second season that premiered on January 2020.

The series also crossed over in Grand Summoners which featured Naofumi, Raphtalia, Melty and Filo as possible summons.

Compare to The Hero Laughs While Walking the Path of Vengeance a Second Time and Redo of Healer, two other Isekai Light Novels starring a protagonist summoned from his home and promptly betrayed by a Villainous Princess, but have the protagonists go down much darker paths in seeking their revenge.

The Rising of the Shield Hero provides examples of:

Alternative Title(s): Tate No Yuusha No Nariagari, The Rising Of The Shield Hero