Light Novel / The Reprise of the Spear Hero 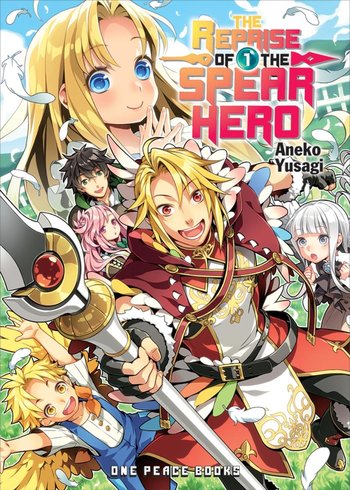 Summoned to another world to serve as the Spear Hero, Motoyasu Kitamura is a pitiful young man who eventually finds himself only able to love filolials. But after being fatally injured in battle, Motoyasu wakes up yet again in the exact circumstances of when he was first summoned. It turns out that his spear possesses an ability known as Time Reversal, allowing him to do an In-Universe Save Scumming. With his stats unaffected by the reset and his memories intact, Motoyasu decides to continue being the Spear Hero, but this time redoing his journey with the knowledge and skills he had to once again see the smile of Filo, the filolial that he loves more than any other.

The Reprise of the Spear Hero (槍の勇者のやり直し, Yari no Yuusha no Yarinaoshi?) manga and light novel by Aneko Yusagi and spin-off series to The Rising of the Shield Hero. The official English translation of the series is published by One Peace Books.

The Reprise of the Spear Hero provides examples of: