Light Novel / The Princess and the Pilot 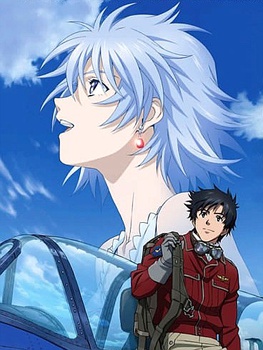 "This is a story... that takes place over one summer—
A story of love and aerial combat."
Advertisement:

A light novel by Koroku Inumura which was later adapted into an animated movie by Studio Madhouse, The Princess and the Pilot (To Aru Hikuushi e no Tsuioku) tells the story of Charles Karino, a mercenary pilot serving under the Levahm Airforce, who is tasked an important mission: to ferry Princess Fana del Moral, only daughter of the ruling family of San Matilia and fiancee to the crown prince of the Empire of Levahm, safely across twelve thousand kilometers of open ocean to the mainland. The sheer distance of the trip is daunting enough, but throw in the fact that Levahm is currently at war with the neighboring Empire of Amatsukami, and whose armed aerial navy and air force patrol those waters, and one can see that the mission is anything but easy.

Directed by Jun Shishido and featuring adapted character designs by Hidenori Matsubara, Remembrances for a Certain Pilot is a tale of adventure (and a bit of romance), told amidst the backdrop of war.

No relation to A Certain Magical Index. It is, however, related to The Pilot's Love Song and Toaru Hikuushi e no Seiyaku, which take place in the same universe.

Alternative Title(s): To Aru Hikushi E No Tsuioku, The Princess And The Pilot