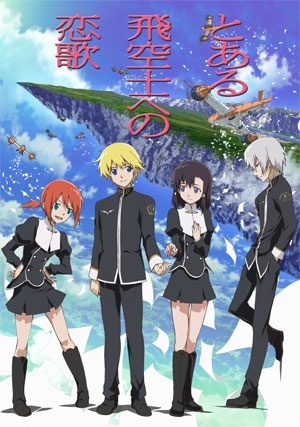 At the age of nine, Karl La Hire, Prince of the Ballesteros Empire, lost everything to the Revolution of the Wind. The orphaned boy then sets out on a journey, hoping to one day seek revenge on Nina Viento- the symbol of the very revolution that robbed him of his family and his status. Six years later, we find Karl- now renamed Kal-el Albus to protect his identity- living with a middle-class family, having been adopted as the son of Michael Albus, an airship mechanic. Kal-el and his adopted sister Ariel eventually enroll at Cadoques High School on the levitating island of Isla to receive training in order to become pilots. While there he meets a girl named Claire Cruz, who he eventually falls in love with.

The Pilot's Love Song (Toaru Hikūshi e no Koiuta) was originally published as a series of five light novels between 2008 and 2011. The series was written by Koroku Inumura, and takes place in the same fictional universe as Inumura's The Princess and the Pilot and Toaru Hikuushi e no Seiyaku. An animated adaption by TMS Entertainment is scheduled to air on January 6, 2014, and was streamed on Crunchyroll under the title The Pilot's Love Song.