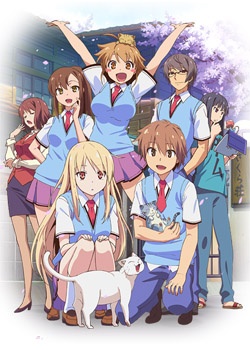 Refusing to part with a stray cat he found, Sorata Kanda, a second-year high school boy from Suimei University of the Arts High School ("Suiko", according to local parlance), opted to be kicked out of the regular school dorms, and lands at Sakura Hall, a wooden two-level house and bedlam of Suiko's talented yet troublesome teens: Misaki Kamiigusa, a hyperactive otaku and anime prodigy, Jin Mitaka, her childhood friend and consummate womanizer, and Ryuunosuke Akasaka, a reclusive technology guru. And all of them are under the watch of Chihiro Sengoku, a notoriously lazy art teacher.

One day, Sorata receives a request from Chihiro: pick up her cousin, Mashiro Shiina, a fellow second-year. But just when he thought he found an innocent sweetie he wants to protect from the craziness that is his dorm (which he doesn't plan on staying for too long), Sorata discovers her two secrets: on one hand, she's a world-renowned artist and genius; on the other hand, she has very poor social and life skills and can't take care of herself. With Chihiro too lazy to attend to her cousin, she tasks Sorata with having to take care of Mashiro's daily needs, down to picking up her underwear. Just like the seven cats he's taken in since starting school, Sorata takes her in and becomes her affectionate caretaker ("owner/master" to Mashiro).

The Pet Girl of Sakurasou (Sakura-sou no Pet na Kanojo) is a 2010-2014 Light Novel series written by Hajime Kamoshida and illustrated by Keiji Mizoguchi, published by ASCII Media Works under the Dengeki Bunko label, completed at 13 volumes (10 main, 3 extra). The series has a manga adaptation written by Kamoshida and illustrated by Houki Kusano, which was serialized in Dengeki G's from 2011 to 2015. It also has a 24-episode anime adaptation which debuted as part of the Fall 2012 Anime lineup, directed by Atsuko Ishizuka and released by JC Staff. A Visual Novel for both the Playstation Portable and Playstation Vita is also in the works, developed by Netchubiyori and slated for a Spring 2013 release.

Viewers in the United States, Canada, the United Kingdom, Ireland, South Africa, Australia, or New Zealand may watch this show legally at Crunchyroll