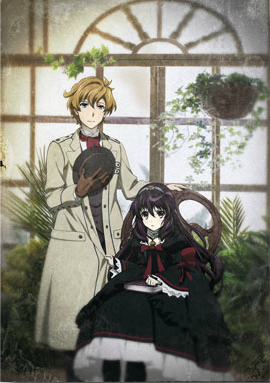 The Mystic Archives of Dantalian (Dantalian no Shoka) is a Light Novel series written by Gakuto Mikumo (who wrote Asura Cryin' and would later write Strike the Blood) between 2008-2011, which concluded at 8 volumes. It had a manga adaptation by Chako Abeno and a Summer 2011 Anime series by Studio Gainax.

Huey, a young ex-pilot of the Great War, inherited the old mansion of his deceased bibliomaniac grandfather and the book collection stored within. However, there was one condition: he also had to inherit the "Bibliotheca".

When he inspects the mansion, he discovers a cellar that is filled with piles of books. Sitting amongst them is a girl dressed in black who is silently reading a book. She is called Dalian and has a big lock hanging before her. She herself is the gateway to the "Bibliotheca Mystica de Dantalian", which contains the prohibited "Phantom Books".

The Mystic Tropes of Dantalian: