Light Novel / The Muzzle Of Nemesis 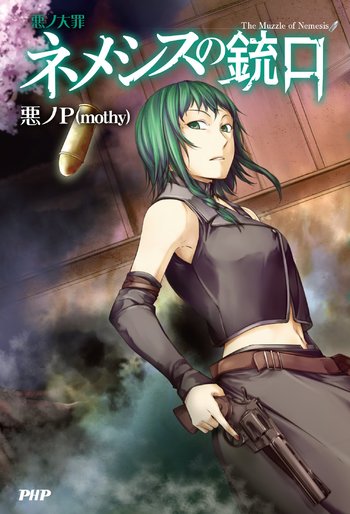 Deadly Sins of Evil: The Muzzle of Nemesis is a light novel written by mothy with accompanying illustrations by Ichika, released in 2017.

The story takes a deeper look into the life of Nemesis from the song of the same name, framed by glances into her memory from Levia, a psychiatric researcher who can perform the "Swap Technique, Mind Type"—a technique that allows one to experience pieces of someone else's life vicariously through their memories, though there are risks to the procedure. It jumps through multiple points in her history, detailing her downward spiral into the destructive madness that ends the Third Period.

The novel is largely set in an Evillious equivalent to World Wars I and II within the various countries involved in both conflicts, such as Elphegort (Germany), Levianta (Russia), Lucifenia (France), etc. Shots and flashbacks of Nemesis' life are interspersed with narrative commentary by Levia as she witness all of it at the behest of the mysterious Postman who brought a catatonic Nemesis into the research facility where she works one day.

The novel is preceded by Judgment Of Corruption.

The Muzzle of Nemesis provides the following tropes: