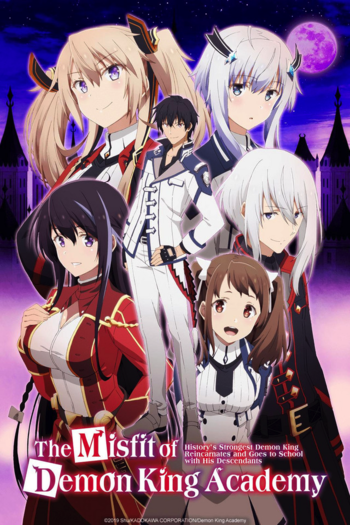 "Would you believe me if I told you I was the Demon King of Tyranny?"
Advertisement:

The world is in flames. Human nations have been wiped off the map. The forest of the Spirits has been burned down. Even the Gods themselves have been slain. All were the work of one individual with power far beyond compare: Anos Voldigoad, the Demon King.

But His Majesty tires of the constant fighting and suffering on all sides of this endless war. So when the Hero Kanon bursts into his throne room with the God of Creation Militia and the Great Spirit Leno, he offers not a battle to end all battles, but an offer: the four of them will cast a spell that will separate the realms of the humans, the demons, the gods, and the spirits, giving them 1,000 years of isolation to let their grudges die and fade away to dust. All the Hero needs to do is kill him to release his magical power.

Anos isn't worried, however. He's far too powerful to stay dead forever and has full trust in his loyal descendants to keep things in order until he reincarnates.

Present Day. The world is at peace.

The Demon King Academy, Delsgade, is welcoming its most consequential batch of students yet, dubbed the "Generation of Chaos". This year is the time that the Demon King will reincarnate and retake his throne and any one of them could be His Majesty... but no one quite believes Anos when he says he is the Demon King, especially when he keeps claiming his name isn't "Avos Dilhevia".

Anos finds that history has been rewritten while he was dead, his most loyal servants no longer recognize him or even attack him, and he can't quite convince anyone despite the obscene amount of magical power and skill he shows, especially with how the arcane arts have deteriorated due to the long years of peace.

Anos isn't discouraged, however. He'll earn new allies, regain his throne, and destroy anything and anyone that gets in his way.

The Misfit of Demon King Academy (魔王学院の不適合者, Maō Gakuin no Futekigōsha) note The full title of the series is: 魔王学院の不適合者 ～史上最強の魔王の始祖、転生して子孫たちの学校へ通う～ Maō Gakuin no Futekigōsha ~Shijō Saikyō no Maō no Shiso, Tensei Shite Shison-tachi no Gakkō e Kayou~ (The Misfit of Demon King Academy: History's Strongest Demon King Reincarnates and Goes to School with His Descendants) is a Light Novel by 秋 (Shuu) and illustrated by Shizuma Yoshinori currently being published by Ascii Media Works. It was originally a Web Novel hosted on Syosetu and has also been adapted into a manga and an anime, the latter created by the Studio SILVER LINK. and which started airing on July 4, 2020. A second season has been announced to be made in the future.

In March 2022, the light novels were announced to be licensed by J-Novel Club.