Light Novel / The Master of Ragnarok & Blesser of Einherjar 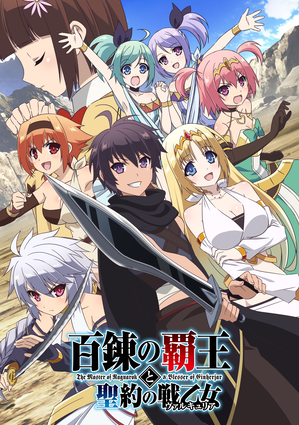 Behold, the patriarch of the wolf clan.
The Master of Ragnarok & Blesser of Einherjar (Hyakuren no Haō to Seiyaku no Varukyuria) is a series of Light Novels written by Seiichi Takayama and illustrated by Yukisan, which began in 2013 and is still ongoing. A manga adaptation began serialization in 2015, and a 12-episode anime adaptation aired in 2018.
Advertisement:

The story focuses on Yuuto Suou who finds himself dragged off into the world of Yggdrasil after a "test of courage" goes horribly wrong. He ignores the myth regarding the mirror in an ancient shrine which would whisk away people to another world, under the right conditions, and takes a selfie of himself with said mirror. This sets off (at least in part) the conditions to be sent to another world.