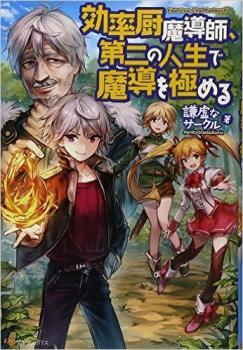 I can’t even waste one second. I must train my magic efficiently this time.
The Mage Will Master Magic Efficiently In His Second Life (a.k.a Kouritsu Kuriya Madoushi, Daini no Jinsei de Madou wo Kiwameru or Re: Master Magic) is a light novel, web novel, and manga series that tells the story of Zeff Einstein, a mage who spent his whole life mastering red magic and was finally recognized for it, yet a new spell that was soon created revealed that his talent for red magic was his lowest.
Advertisement:

Bitter at the thought of all his wasted effort, he creates a spell to send his old self back in time to his younger body and together with the determined "genius" mage Milly and the handsome swordswoman Claude, he intends to master magic more efficiently this time.

Alphapolis publishes both the novels and manga adaptation that premiered in 2015.

Alternative Title(s): The Mage Will Master Magic Efficiently In His Second Life