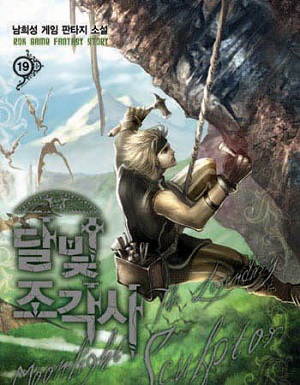 Just another average day for our Moonlight Sculptor
"Through grinding, nothing is impossible!"
— Weed
Advertisement:

The Legendary Moonlight Sculptor is a Korean light novel written by Nam Hi-Sung (남희성). Due to its incredible popularity, it was then adapted into a manhwa, illustrated by Kim Tae-Hyung.

Lee-Hyun, the protagonist of the story, is a stingy, greedy, but hardworking young man suffering a life of poverty and debt after the untimely death of his parents. Forced to work throughout his childhood and adolescence, he's gone through a rough lifestyle that has made him completely devoted towards making money to take care of his sister and sickly grandmother. This dedication to profit was also reflected through his one hobby, an immensely popular game known as "Continent of Magic", where his in-game character "Weed" rose through sheer grinding to become the most well known and feared.

Lee-Hyun's luck begins to turn around however on his 18th birthday, where his decision to auction off his Continent of Magic character in a Real Money Trade and focus on working (now that he can do it legally), sparks a bidding war that concludes at 3,090,000,000 won (about 3,000,000 usd). While most of his earnings go to Loan Sharks to finally pay off the last of his family's debts, Lee-Hyun realizes he can use online gaming to fund his family's future, and soon jumps into the new virtual reality game known as "Royal Road" to build up the legacy of "Weed" once again.

Unfortunately once again for Weed, his initial plan to get rich by gaining a legendary hidden class soon gets him stuck with the "Moonlight Sculptor" class, as "art" classes are famous for being terrible at gold farming of pretty much all types. Undeterred, Weed vows to grind twice as hard, hunting for hours on end, practicing production skills of all types, and do whatever it takes to make even one more gold coin.

Thus begins the adventures of Weed, The Legendary Moonlight Sculptor.