Light Novel / The Legend of the Legendary Heroes 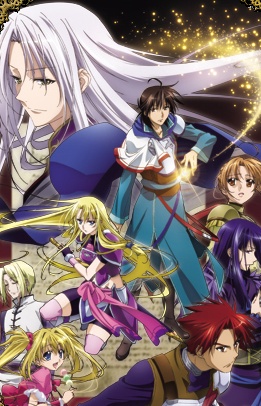 What would it be like, not being able to choose your own life? What if your family died? How about the person you love? No one ever wants that, and yet the world hands out that sorrow for no reason, laughing all the way.
Advertisement:

The Legend of the Legendary Heroes (Densetsu no Yuusha no Densetsu) is a series of Light Novels written by Takaya Kagami, illustrated by Saori Toyota, and published by Fujimi Shobo since 2002.

It tells the story of Ryner Lute, a young mage who bears an Alpha Stigma, which grants him incredible magic power at the cost of making him go a tiny bit insane sometimes. After surviving a brutal battle, he is tasked by his friend Sion Astal (who also happens to be the king of Roland, the country they live in) with obtaining relics of the so-called legendary heroes who saved the kingdom from monsters in the distant past. And then things escalate quickly.

Despite its relatively light-hearted premise, this series is extremely fond of Mood Whiplashes, with a heavy focus on politics, overcoming trauma, and themes revolving around what humans will prioritize above all else and how far they will go to achieve their goals.

Over the course of its (on-going) run, the series has generated several spin-offs and adaptations, including an anime adaptation in 2010, created by ZEXCS and licensed by Funimation, which follows the first series. note Strictly-speaking, Densetsu no Yuusha no Densetsu is the title of the first series, with the sequel being known as Dai Densetsu no Yuusha no Densetsu. Manga adaptations include the primary manga, which similarly covers the first series, and The Legend of the Legendary Heroes Revision, a compressed and alternate version of the story. The series has also spawned a number of Drama CDs and a Japanese-only video game known as Legendary Saga.

Not to be confused with the similarly-named Legend of Galactic Heroes.

Alternative Title(s): The Legend Of The Legendary Heroes