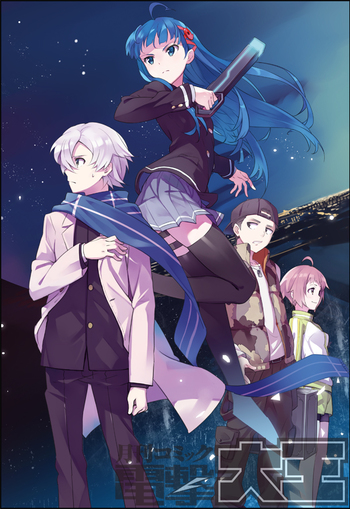 "I'm looking for absolute solitude... That's why my code name is Isolator."
Advertisement:

Minoru Utsugi lived a nice ordinary life with his loving family, but that all changed the day they are tragically murdered in a home invasion. In the eight years since this terrible childhood tragedy, now sixteen years old and living with his adoptive sister, Minoru longs to simply disappear not only from his own life, but from the memories of everyone else as well. What he longs for is nothing but the ultimate, perfect, absolute solitude.

That all changed when mysterious extraterrestrial life forms, called the Third Eye, come into contact with the human species granting the individuals they encounter strange powers. This incident grants his wish giving Minoru the power of Isolation—an unbreakable shield that surrounds his body.

But not all of these small alien orbs are as harmless as Minoru's. Some of these eyes known as Ruby Eyes are malicious and seek to case harm and others known as Jet Eyes seek out these murderous Rubies. And he soon finds himself thrust into a battle he never desired to fight. In this fight, he meets Yumiko Azu and learns of an organization of Jets that seek to stop the Ruby Eyes. As his old life comes to an end, he steps into a new role…as the Isolator!

The Isolator: Realization of Absolute Solitude (Zettai Naru kodoku-sha ≪Isolator≫) or just The Isolator is an ongoing 2014 Light Novel series written by Reki Kawahara (the creator of Sword Art Online & Accel World), and illustrated by Shimeji that is published by ASCII Media Works under the Dengeki Bunko imprint. The series was originally published on Kawahara's website alongside Sword Art Online under the title Absolute Solitude (Zettai Naru Kodoku) in 2004 but left unfinished and on hiatus after his writing debut in 2009. Until 2014, when Kawahara decided to return to series and revive it as light novel. It received a manga adaptation illustrated by Naoki Koshimizu (miz22) and serialized in the Dengeki Daioh in 2015 and ran from Jun 27, 2015 to Jan 27, 2018 for a total of four volumes.

As of May 2019, five volumes have been published: The Biter, The Igniter, The Trancer, The Stinger, and The Liquidizer.

Also has a Character Page under heavy construction here.