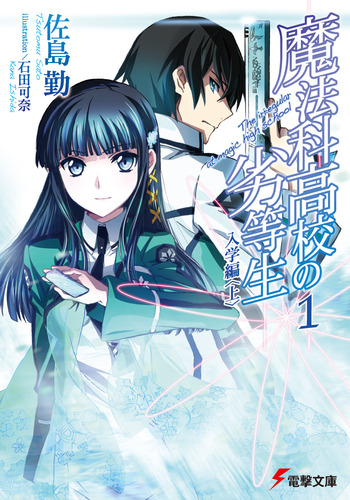 "Magic" is a product of neither legends nor fairy tales. It has become a technology of reality for nearly a century. Various countries in the world are locked in a race in nurturing "Magicians".

Tatsuya Shiba is a reserve student without magic capability at First High School, a magic high school, along with his sister Miyuki, who happens to be the top student among the freshmen. What will happen to him, and how will he live his school life where he is one of the many reserves in the school looked down upon by the chosen magical students?

The Irregular at Magic High School is a Japanese light novel series written by Tsutomu Satou with illustration by Kana Ishida . The novel began as a web novel serialization in "Let's Become a Novelist" on October 12, 2008. It then became the second web novel after Sword Art Online to be commercialized and published by Dengeki in July 2011. The series would be released 4 years later by Yen Press in North America. The light novel series received positive critical attention from both Japanese and American critics.

The web novel consisted of only 6 web chapters written covering the First Year arc completed on March 21, 2011, and the author has already planned for a total of 15 web chapters to cover the entire three years of Magic High School. Included also is a series of side stories, Mahouka Koukou no Shounen Shoujo (loosely, The Boys and Girls at Magic High School).

It has been adapted into a manga by Hayashi Fumino with Kitaumi Tsuna as the artist. The light novel is published by ASCII Media Works in Dengeki Bunko while the manga is published by Square Enix in GFantasy.

An anime adaptation by Madhouse began airing in the Spring 2014 Anime season. A second season began in Autumn 2020, covering the Visitors Arc.

All spoilers for volumes 1-11 are unmarked and all character tropes should be moved to the proper character page.

The Irregular at Magic High School provides examples of: