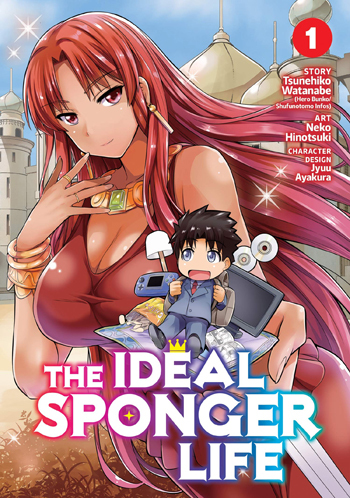 Zenjirou Yamai is an overworked salaryman for a shady company who's thinking about how he's going to spend a rare two consecutive days off, when he suddenly finds himself before a beautiful bronze-skinned woman in what appears to be a throne room. She introduces herself as Aura Capua, queen of the Capua Kingdom and the possessor of her family's Space-Time Magic which she used to summon him to her world.

In the aftermath of a major war, she was the only royal heir left, becoming a queen regnantnote meaning a queen who rules as sovereign in her own right, unlike a queen consort who is just the spouse of a reigning king in a traditionally male-dominated society. However, there is great pressure on her to marry another noble from the royal bloodline and have children who will inherit the royal magic. Since her noble suitors would be likely to assert their own authority if one of them became her husband, she's asking Zenjirou—a long-lost descendant of a crown prince of Capua who fled to Earth with his lover—to marry her. And what's in it for him? All he's got to do is make children with her, and she'll happily let him laze around in the palace while she does all the governing.

Once Aura has answered all his questions, Zenjirou agrees to marry her and gets his Earthly affairs in order before returning to Capua for good. He and Aura have great chemistry, and he's brought some modern technology to help make his stay more comfortable, but he's still got a lot to learn about his new world, and staying out of politics might not be as simple as he thought. How will things turn out as Zenjirou tries to start his sponger life in another world?

The Ideal Sponger Life (A.K.A. Risou no Himo Seikatsu) is an Isekai Light Novel written by WATANABE Tsunehiko and illustrated by Jū Ayakura (文倉十 Ayakura Jū). Originally a web novel that won first prize in the "Let's Become A Novelist" competition, it incorporates elements of fantasy, ecchi, romantic comedy, and government procedural. The Sponger Life manga adaptation is licensed in North America by Seven Seas Entertainment. The novel is licensed by J-Novel Club.