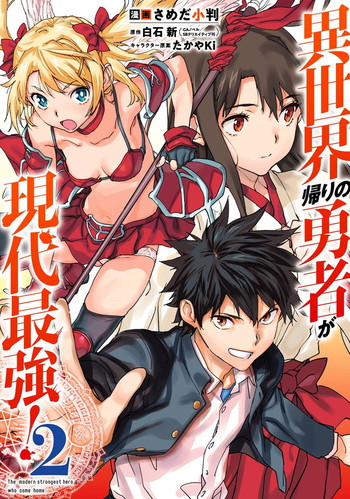 Daiki Morishita was once an ordinary, wimpy high school student until he was summoned to a fantasy world as its hero to defeat the Demon Lord and restore peace to the land. His journey was long and hard-fought, but he succeeded and was hailed as the savior of the land. But for all his new powers and glory, he still wanted to go home. After saying his goodbyes to his friends and allies, he's transported back to the same day he left. To his surprise, he's kept all of his superpowers from his otherworldly adventure. Pleased with this, he decides to use his abilities to live his ideal high school life.

But Morishita's world may not be as normal as he thinks. After chance encounters with his Tsundere senpai and a strange foreign exchange student, he finds that adventure can be found close to home.

The Hero Who Returned Remains the Strongest in the Modern World is a light novel written by Arata Shiraishi with art drawn by Takayaki. It follows Morishita has he readjusts to life at home that isn't as ordinary as he thought. The novel was adapted to manga in 2019, running on the digital-only platform Manga Up!.

The Hero Who Troped Remains the Strongest in the Modern World: