Light Novel / The Hero is Overpowered but Overly Cautious 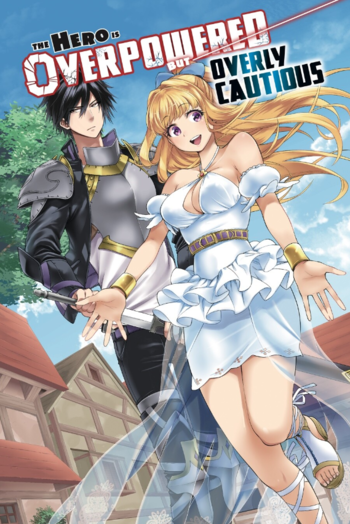 The Hero is Overpowered but Overly Cautious (Kono Yūsha ga Ore Tsuē Kuse ni Shinchō Sugiru / 慎重勇者~この勇者が俺TUEEEくせに慎重すぎる~) is a Light Novel series written by Light Tuchihi and illustrated by Saori Toyota. It began as a web novel in 2016 before it became a light novel series in 2017. The series received a manga adaptation, which was serialized in Fujimi Shobo's Monthly Dragon Age from November 9, 2018 to October 7, 2022. Both the LN version and manga adaptation are licensed by Yen Press. An anime adaptation by White Fox aired from October 2 to December 27, 2019.
Advertisement:

The gods are responsible for summoning people from Earth to save countless worlds imperiled by demons. Ristarte, a novice goddess of healing, is tasked with saving Gaeabrande, a world with an S-ranked salvation difficulty. She summons the strongest hero candidate she can find, Seiya Ryuuguuin, in the hopes that his talents can overcome even this impossibly dangerous challenge.

However, Seiya has an incredibly cautious personality, and refuses to take action until he feels "perfectly prepared." Despite his quirks, his careful methods may be the key to overcoming the cunning and powerful enemies that await him.

The Spare needs a Spare

Seiya insists on getting 3 sets of armor, one of which will be the spare for the spare. Ristarte thinks he's being ridiculous.

The Spare needs a Spare

Seiya insists on getting 3 sets of armor, one of which will be the spare for the spare. Ristarte thinks he's being ridiculous.