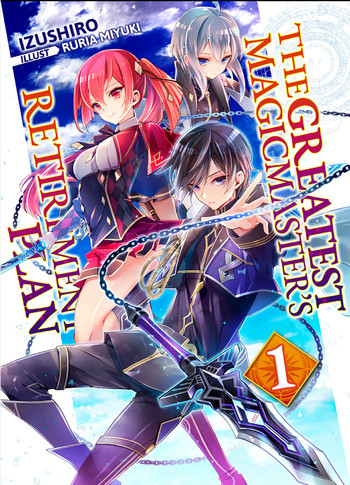 Volume 1 covernote From the frontmost: Alus, Tesfia, and Loki
The Greatest Magicmaster’s Retirement Plan (Saikyou Mahoushi no Inton Keikaku) is a 2015 Web Serial Novel / 2017 Light Novel series written by Izushiro and illustrated by Ruria Miyuki. The light novel was licensed by J-Novel Club in 2019.

More than a hundred years ago, magic-using Fiends suddenly appeared, killed most of humanity, and claimed most of the planet's surface. The seven surviving nations are slowly attempting to take back their lost territory by raising armies of Magicmasters, who are all ranked according to their combat performance and achievements. The number one Magicmaster, Alus Reigin, decides to retire after fulfilling ten years of service to the nation of Alpha, but his superiors convince him to go on extended leave and conduct research at a Magicmaster school while attending as a student.

This works provides examples of: