Light Novel / The Genius Prince's Guide to Raising a Nation Out of Debt (Hey, How About Treason?) 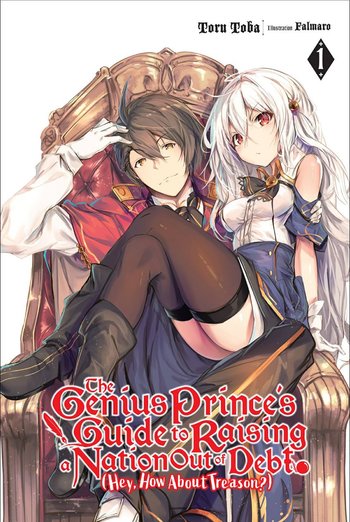 The Genius Prince's Guide to Raising a Nation Out of Debt (Hey, How About Treason?)/Tensai Ouji no Akaji Kokka Saisei Jutsu ~Sou da, Baikoku Shiyou~ is a 2018 Light Novel written by Toru Toba and illustrated by Fal Maro. The series was licensed by Yen Press in 2019.

Prince Wein of Natra is seen by his people as a promising new ruler, but in reality, he's lost all hope in governing his tiny kingdom while surrounded by much stronger rival countries. In order to retire, he plans to sell out the kingdom to the Earthworld Empire and makes deals with them so that the annexation will be bloodless and publicly acceptable. Unfortunately, Earthworld's emperor dies of illness, putting a wrench in the annexation and causing people to mistakenly believe Wein outwitted the empire. Other countries and factions within the empire scheme to fill in the power vacuum and Wein has to find a way to survive despite Natra's terrible budget.

In January 2021, it was announced that NBCUniversal Entertainment Japan and Yokohama Animation Lab would produce an anime adaptation, with Soma Saito as the voice of Prince Wein. It began airing about a year later on January 11, 2022.