Light Novel / The Garden of Sinners
aka: Kara No Kyoukai 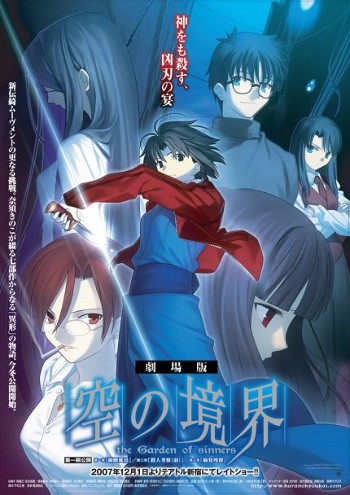 Kara no Kyoukai: The Garden of Sinners ("The Boundary of Emptiness") is a novel by Kinoko Nasu of TYPE-MOON/Notes fame, written before he became involved in the Visual Novel business. Though considered by many to be the prototype of Tsukihime, it is much, much more complex, sometimes to the point of being Mind Screw.

The Garden of Sinners can be read as a multitude of ways. On the surface level, it is a Paranormal Investigation story about the Garan-no-dou detective agency that confronts various, seemingly unconnected aberrations occurring within the city which seem to have something bigger behind them than it first appears. It is also, however, a story of Shiki coming to terms with the death of her other self — the only companion she has ever had or needed before. Finally, it is a dark and twisted love story of a perfectly ordinary boy and an extraordinarily broken girl. As one of the earliest works within the Nasuverse, the novel also introduces most of The 'Verse's fundamental concepts, including souls, Akasha, Counter Force, Magic and Magecraft, and Origin.

Advertisement:
Consists of the following novels and stories

Each of the first seven chapters was adapted into a movie by ufotable from 2007 to 2009, and the original epilogue was released as a 30-minute OVA in February 2011. The Distant Finale Mirai Fukuin/Future Gospel received a movie adaptation in 2013, and was released on Japanese home video in February of 2014. There is also a manga adaptation published in September 2010 in the Japanese online magazine Saizensen, which follows the movie storylines and adds additional scenes not found in the movie or light novels set in-between each movie.