Light Novel / The Garden of Sinners 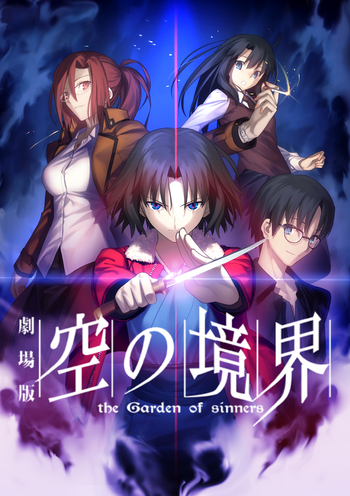 The Garden of Sinners (Kara no Kyoukai/空の境界/"The Edge of Emptiness" in Japan) is a novel by Kinoko Nasu of Type-Moon/Notes fame, written before he became involved in the Visual Novel business. Though considered by many to be the prototype of Tsukihime, its story and structure are also much, much more complex, sometimes to the point of Mind Screw.

April 1995. Shiki Ryougi is a girl from a centuries old clan that often develop supernatural abilities. In Shiki's case, she has two distinct ​"male" and "female" personalities, both conscious, both aware of the other, and both essentially the same person with different qualities. Unfortunately, these dual consciousnesses, combined with her family's strict upbringing to make the most of them, has led her to avoid others' company. One day at school, however, an empathetic classmate, Mikiya Kokutou, tries to break her self-imposed isolation. Soon thereafter, gruesome murders begin occurring across the city, and one night several months later, Mikiya stumbles on Shiki standing over a headless corpse, drenched in blood. Refusing to believe that she was the killer, Mikiya keeps trying to become closer to Shiki... until coming up on a year after they met, he grows a little closer than he'd like.

June 1998. Shiki Ryougi wakes up from a coma, and finds she cannot identify her memories as her own. Her doctors say she was in a car accident 2 years ago. In her mind, she feels only " " — utter void. There is no more male nor female Shiki. There is only her... and a strange new ability to stare, and cut, into the void of everything else as well. A "specialist" named Touko Aozaki calls this strange new power the "Mystic Eyes of Death Perception". As Shiki struggles through her own life like a stranger, she begins using her newfound power to throw herself into the middle of bizarre disappearances, suicides and murders in a desperate attempt to just feel alive again, dragging a Mikiya who still refuses to give up on Shiki, and an increasingly fascinated Touko, along with her.

The Garden of Sinners can be read as a multitude of ways. On the surface level, it is a Paranormal Investigation story about Touko, Mikiya, and Shiki's Garan-no-dou detective agency investigating various seemingly unconnected supernatural crimes in their city that are slowly revealed to be the design of a far grander plot. It is also, however, a story of Shiki coming to terms with the death of her other self — the only companion she has ever had or needed before. Finally, it is a dark and twisted love story of a perfectly ordinary boy and an extraordinarily broken girl. As one of the earliest works within the Nasuverse, the novel also introduces most of The 'Verse's fundamental concepts, including souls, Akasha, the Counter Force, Magic and Magecraft, and Origins.

Each of the first seven chapters was adapted into a movie by ufotable from 2007 to 2009, and the original epilogue was released as a 30-minute OVA in February 2011. The Distant Finale Mirai Fukuin/Future Gospel received a movie adaptation in 2013, and was released on Japanese home video in February of 2014. There is also a manga adaptation published in September 2010 in the Japanese online magazine Saizensen, which follows the movie storylines and adds additional scenes not found in the movie or light novels set in-between each movie.

You can read the novels' translation here