Light Novel / The Familiar of Zero 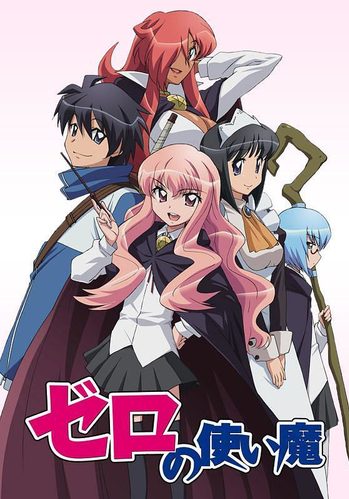 Do NOT call her flat-chested. Or else.
Advertisement:

In a World… where young witches and wizards train at the Tristain Academy of Magic. One of these students is Louise, who's so terrible at magic she's earned the nickname "Zero". When the time comes for students to summon their familiars, she ends up summoning Saito Hiraga, a normal teenager from modern Japan. Even though he's being treated like a dog and forced to do menial labor, Saito stays to protect his mistress. This means dealing with incoming advances from other women around him and getting involved in a war between Tristain's neighboring countries....

Originally a series of Light Novels written by Noboru Yamaguchi, it has since received four seasons of anime adaptations, namely Zero no Tsukaima, Knight of the Twin Moons, The Princess' Rondo and Zero no Tsukaima F that aired from 2006 to 2012. The anime has been released in English as The Familiar of Zero. The first season is the only season that has been dubbed in English. A 7-volume manga by Media Factory has also been translated into English by Seven Seas Entertainment under the title Zero's Familiar.

Tragically, Yamaguchi passed away from cancer on April 4, 2013, leaving the light novels unfinished at 20 volumes plus 5 side story volumes, until it was confirmed in the summer of 2015 that there are plans to continue the books; the 21st novel was published in February 2016, while the 22nd and final planned novel went on sale in late February of 2017. North Americans can watch season 4 of the anime, Familiar of Zero F, here