Light Novel / The Empire of Corpses 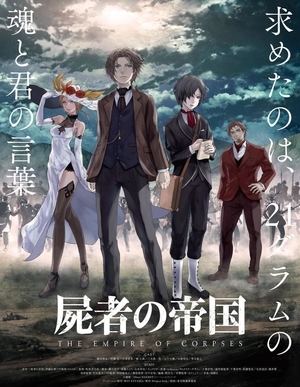 Shisha no Teikoku or The Empire of Corpses is one of the last novels written by Japanese author Project ITOH, and published posthumously. The book was co-authored with his friend Toh Enjoe and won 2013 Seiun Award, and has a film adaptation that hit theaters in Japan on October 2, 2015.

The story takes place in an alternate version of nineteenth century Europe. Thanks to the efforts of the now-missing Victor Frankenstein, humanity has developed the technology to insert artificial souls into cadavers. These "Frankensteins" as they're called, become useful workers that have helped accelerate the Industrial Revolution. The story proper follows John Watson, a medical student from the University of London, found out to be conducting forbidden experiment to bring his friend Friday back to life, he was forced by British government to work as their spy. Russia and Britain are at war over control of Asia, and a scientist named Alexei Karamazof has stolen some of Victor's research notes and helped the Russians develop new, more skilled military Frankensteins. Watson is recruited by the British government for his expertise in intelligent corpse revival to track him down.

The Empire of Corpses is the only Project ITOH book adapted into a film that has yet to receive an official western release, but it along with the other Project ITOH movies have been licensed for an English release by Funimation who gave it a a limited theatrical release on April 19 & 20, 2016.