Light Novel / The Devil Is a Part-Timer! 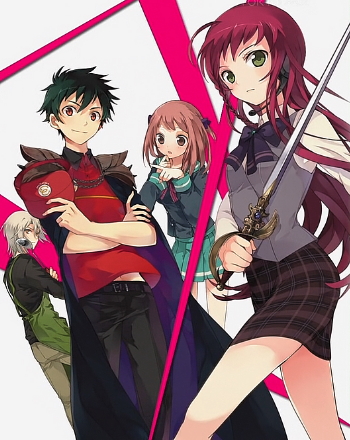 The Demon Lord, his right hand, the Hero that opposes him, and the junior that likes him
"I swear... I will be the one who breaks the sales record for black-pepper fries!"
— Maou Sadao (Satan)
Advertisement:

Ente Isla, a parallel universe of magic and the supernatural, was once on the brink of being conquered by the "Devil King" Satan Jacob. That is until, a Hero united the armies of the world to thwart him, forcing him to escape through a magical portal with his most loyal general Alciel. With his parting words, Satan vowed to return and finish what he started.

Alas, both men are dumped by the portal into modern-day Earth (specifically, Japan) and discover that this universe's lack of magical energy has Brought Them Down To Normal. Completely broke and nigh-powerless, they are forced to adjust to life in this unfamiliar world. While Alciel (under the alias "Shiro Ashiya") investigates a way to regain their powers, Satan (now "Maou Sadao") gets a part-time job at a fast food joint to pay for their rent and daily expenses. Maou takes to his new role with enthusiasm and competency, quickly becoming an ideal employee and gaining the admiration of his cute co-worker, high-school girl Chiho Sasaki.

But Maou's past is quickly catching up to him: Emilia Justina, the Hero who defeated him, has followed him to Earth and is set on finishing what she started...except she too has lost most of her powers, and finds herself reduced to a call-center agent under the name "Emi Yusa." Hilarity Ensues.

The Devil is a Part-Timer! (Hataraku Maou-Sama! or "Overlord At Work!") is a Light Novel series written by Satoshi Wagahara and illustrated by 029 (Oniku). It has two separate manga adaptations and, as of Spring 2013, an anime adapting the first two books in the series. The light novels were published from February 10, 2011 to August 7, 2020, compiled into 21 volumes (excluding side volumes). Ten years after its original publishing, a second season of the anime was announced in March 2021.

Emi Yusa was chosen to represent The Devil is a Part-Timer! in the Ignition update of the Fighting Game Dengeki Bunko: Fighting Climax by Sega, with Maou Sadao as one of the support characters.

The Devil Is A Part-Timer! provides examples of:

Alternative Title(s): Hataraku Maousama, The Devil Is A Part Timer